Which Wedding Flowers Suit Each Season?

Which Wedding Flowers Suit Each Season? 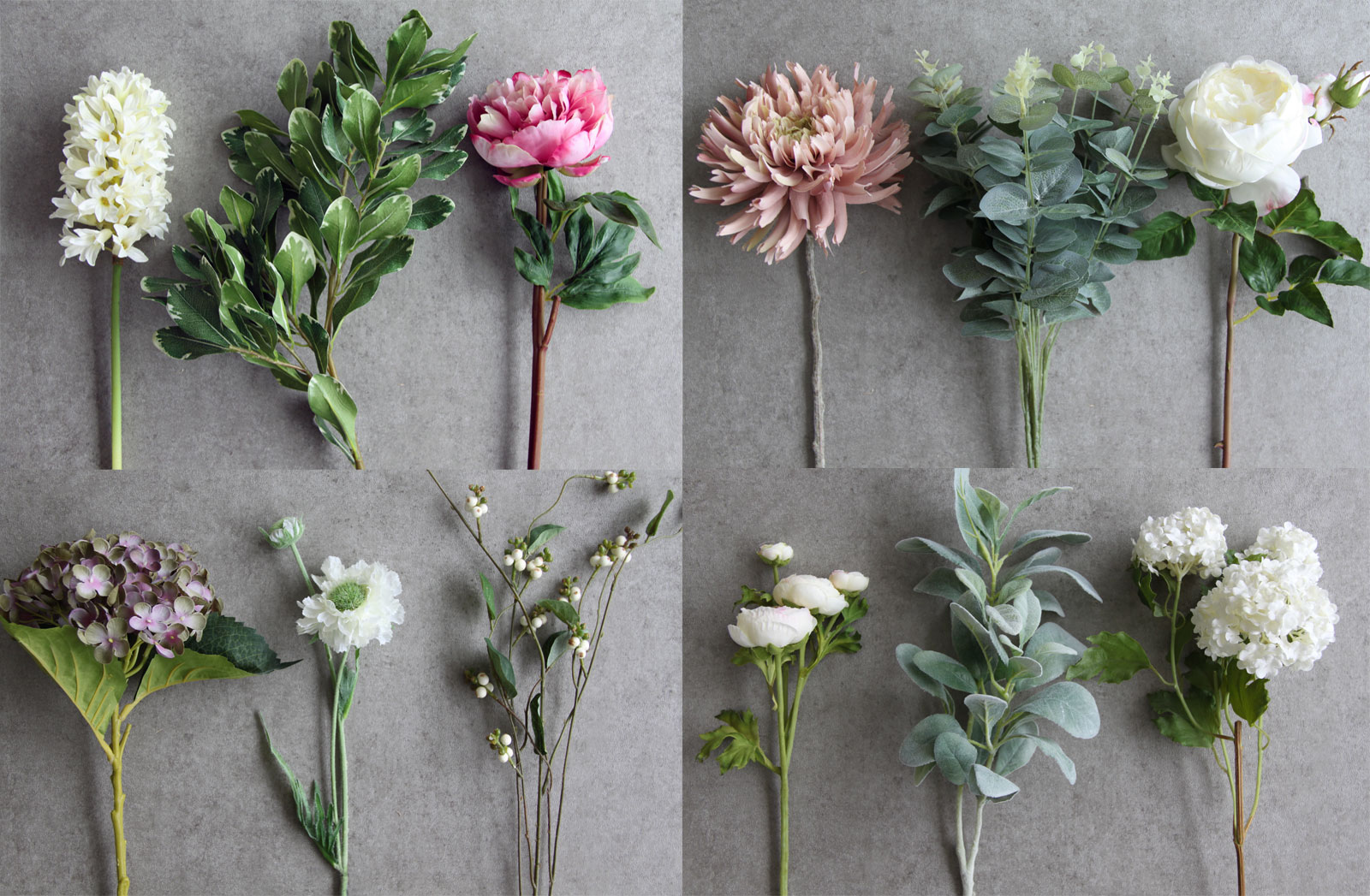 When it comes to wedding flowers, it is important to remember that not every flower is available all year round. Here is a guide of seasonal flowers for your wedding – no matter when you choose to get married!

If you are looking to get married at a certain time of year, then the seasonal flowers available might help you make that decision. Flowers can also help you capture the beauty and atmosphere of the season that you’ve chosen. From delicate, pastel flowers of spring to rich seasonal flowers of winter, this guide will highlight flowers for every season.

Flowers can also help you capture the beauty and atmosphere of the season that you’ve chosen.

For early Spring, when days are just starting to lengthen, you may opt to use Hyacinth. These beautiful flowers have short seasons and are usually gone during April. However, they work perfectly for early spring weddings. Hyacinth is beautifully scented and comes in multiple colours, helping you achieve any look you would want for your wedding. A way to add foliage into your arrangement would be to add Pittosporum. The bright green leaves pair well with the Spring colours, and the plant is an evergreen so it’ll always be available.

As you move towards the end of Spring, you could opt to use flowers such as Lilies or Peonies. Peonies are at the height of their season in May, so are perfect for late Spring weddings. They look delicate and feminine when paired with beautiful Spring-time Daisies. Peonies come in a range of colours, but the most popular are pink, white and coral. 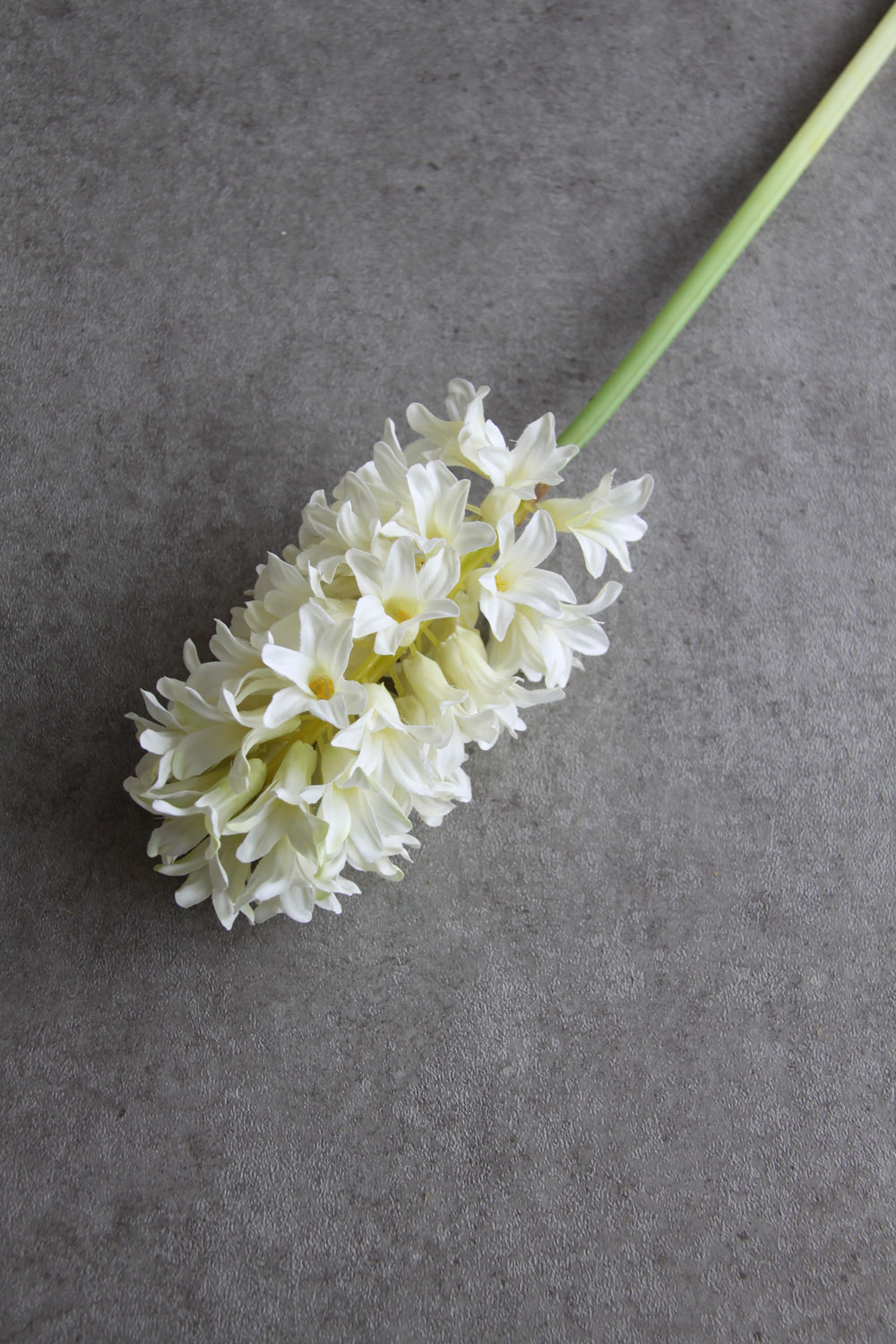 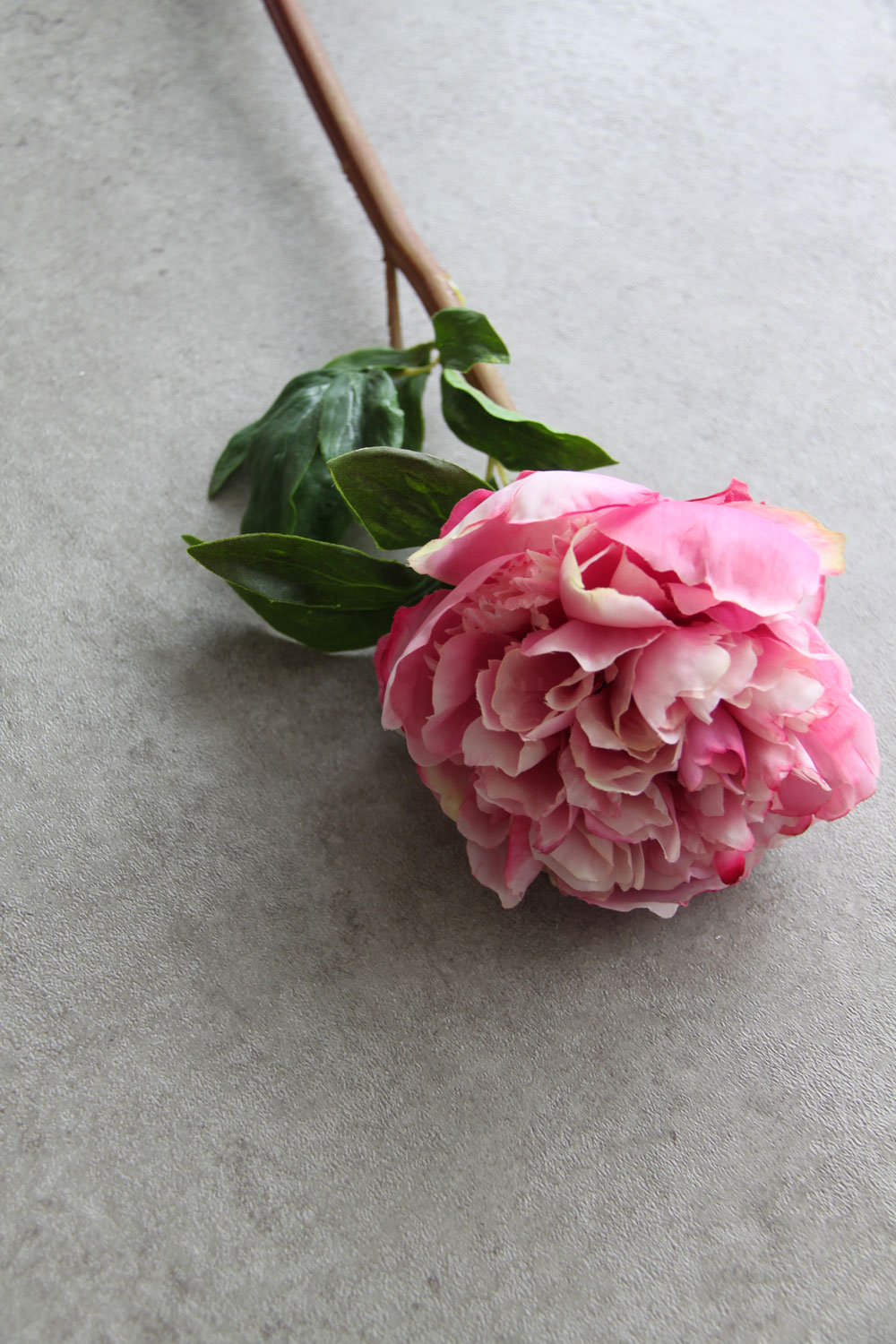 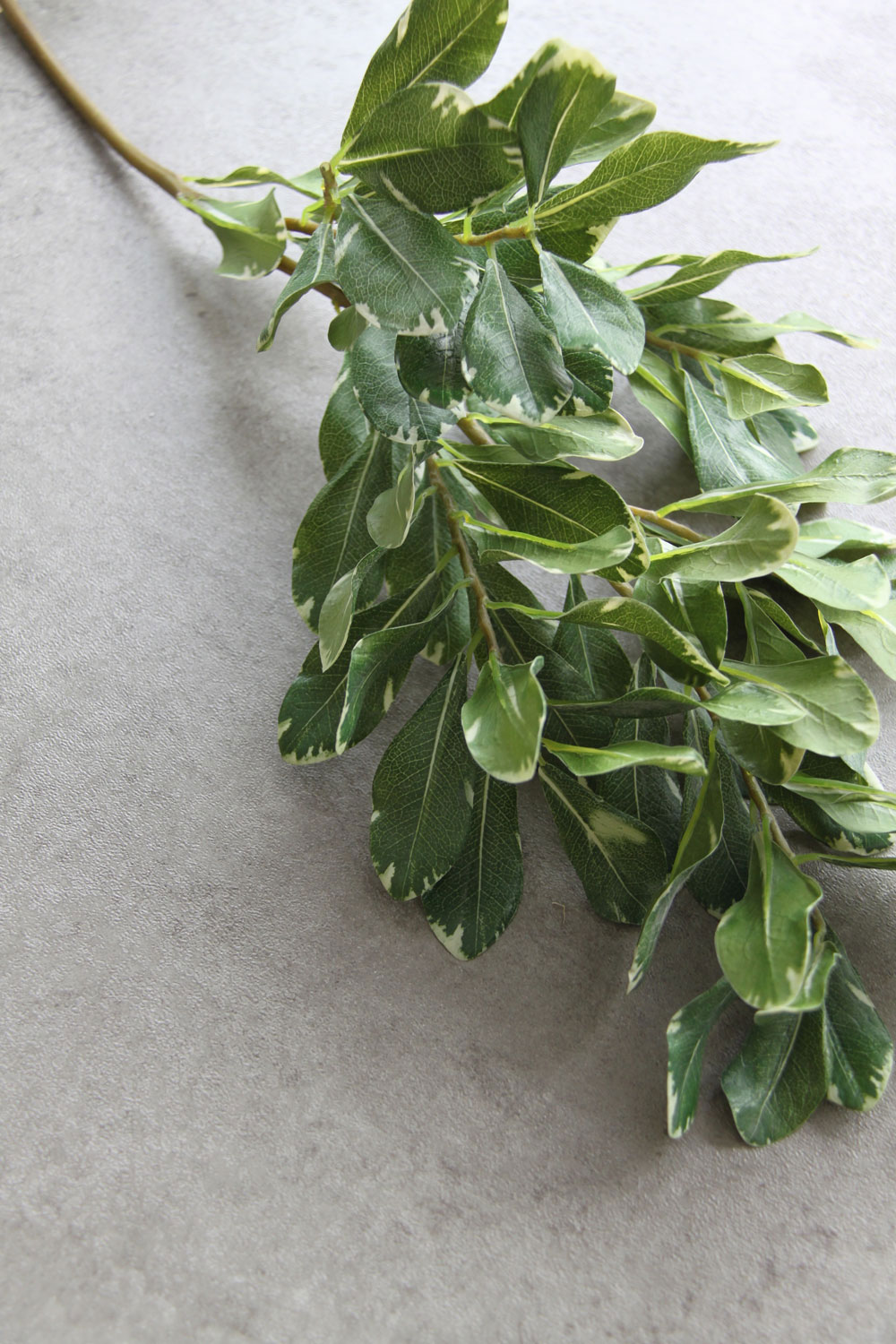 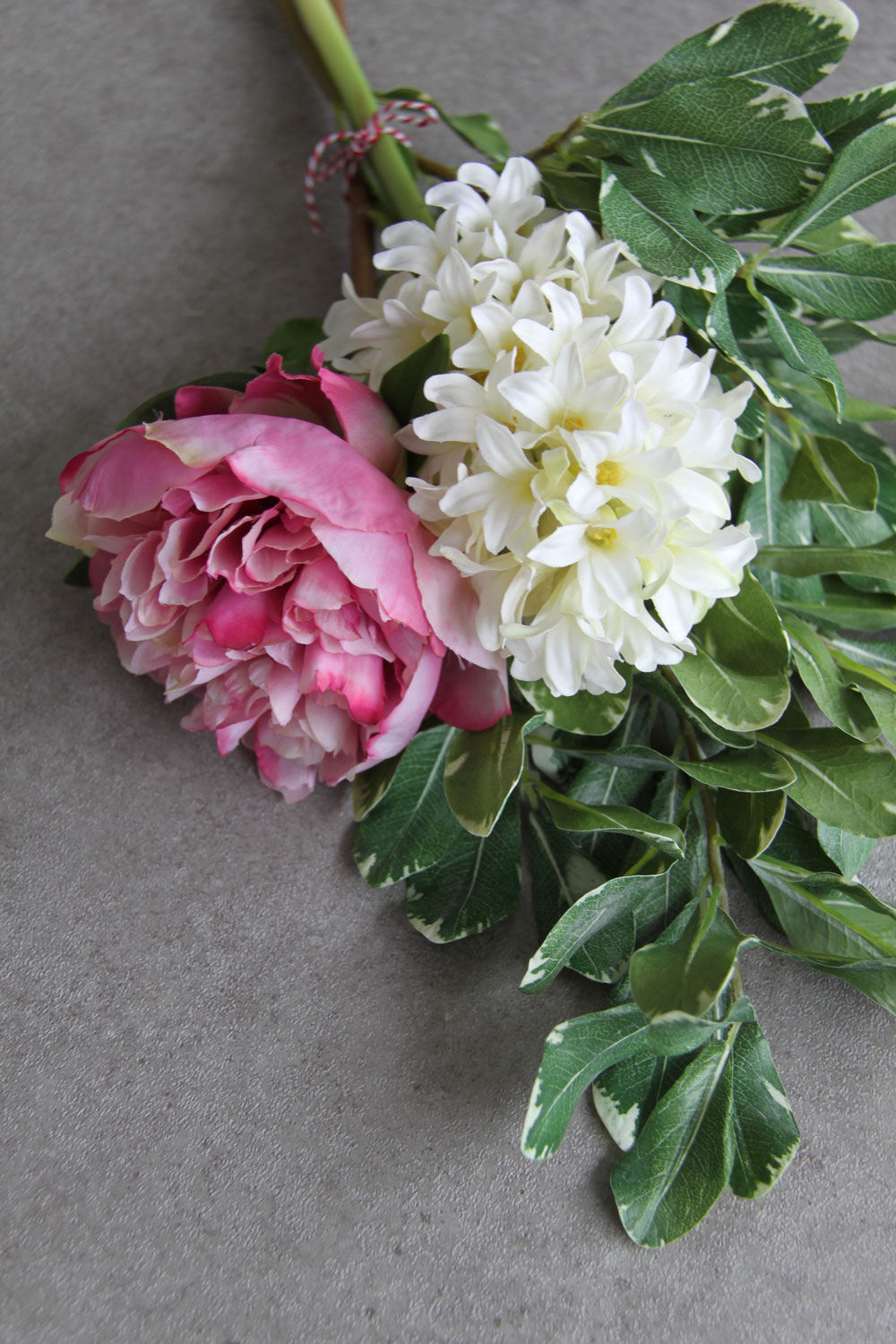 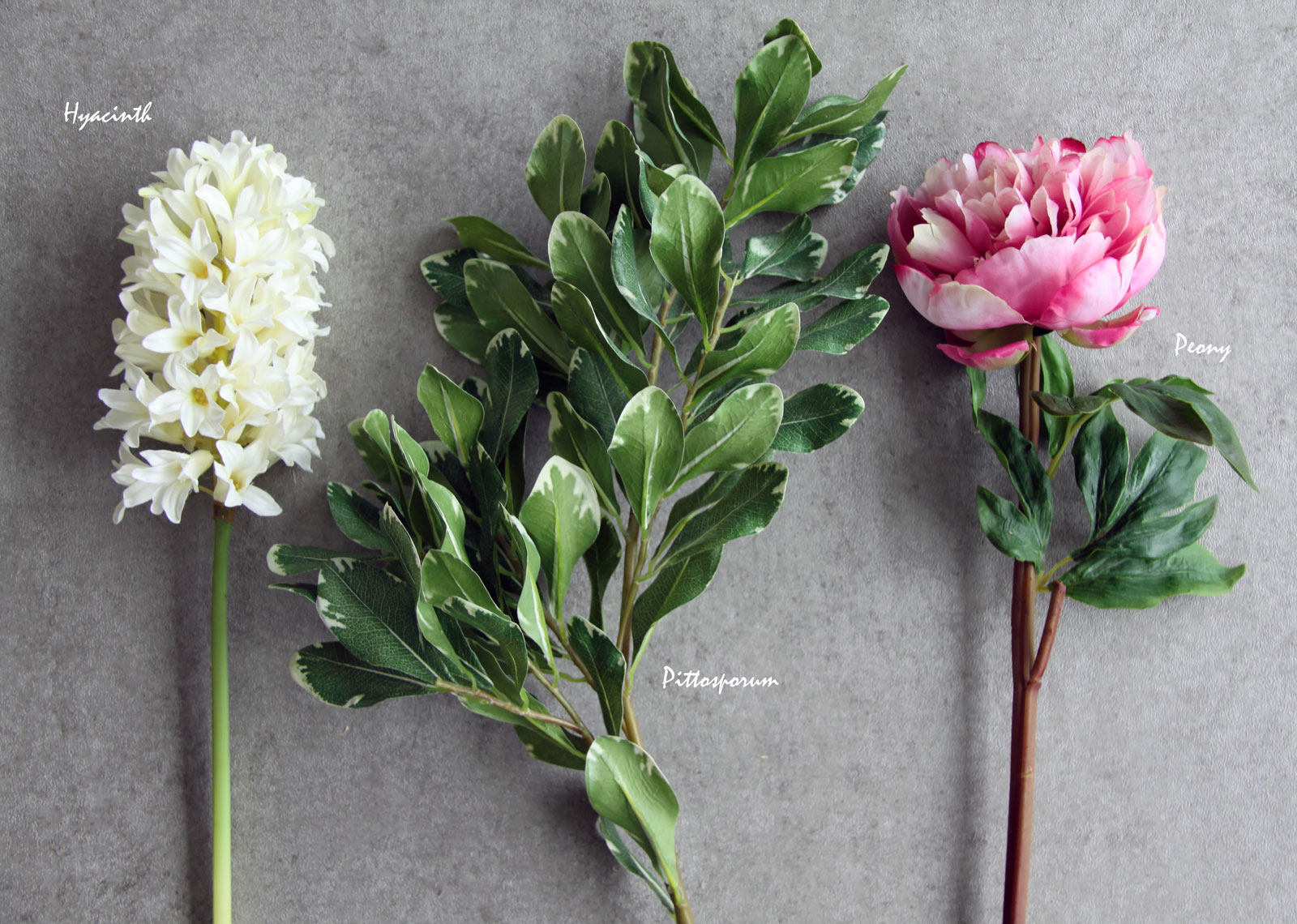 A good seasonal flower for Summer weddings is Astrantia. Although the flower is available from March until November, it peaks between May and October. Astrantia has branching stems and delicate flowers in white or muted shades of pink, purple or burgundy. Another flower to consider is Astilbe. Although it is available from April to November, it perfectly suits Summer weddings because it is so delicate and pretty. Dahlias and Roses are also examples of Summer seasonal flowers. Dahlias are dramatic round flowers that can fill a bouquet. This symmetrical flower can make a big impact whilst being far less expensive than other popular flowers. They also come with tons of different varieties, such as single-flowered or waterlily-shaped, and also a wide choice of colours. A popular choice is Café au Lait Dahlias, which come in creamy pinks, blush, peach ivory and rose hues.

I love the look of layering Summer seasonal flowers with lots of foliage. One way to do this would be to include eucalyptus, however the popular green seeded eucalyptus in unavailable at times during summer as it can fall between growing seasons. A choice you could use instead would be silver dollar eucalyptus, which looks beautiful with traditional white Roses. 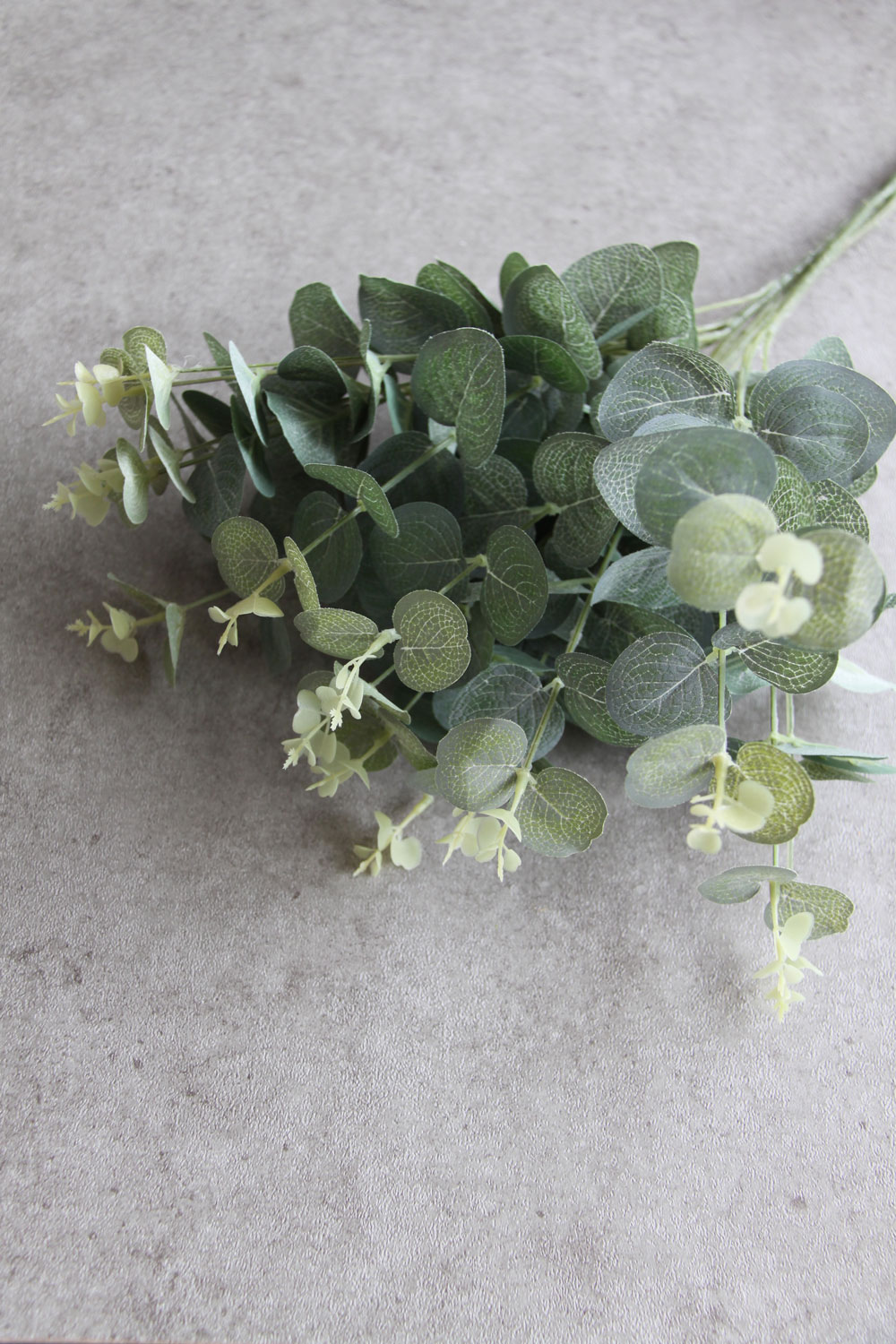 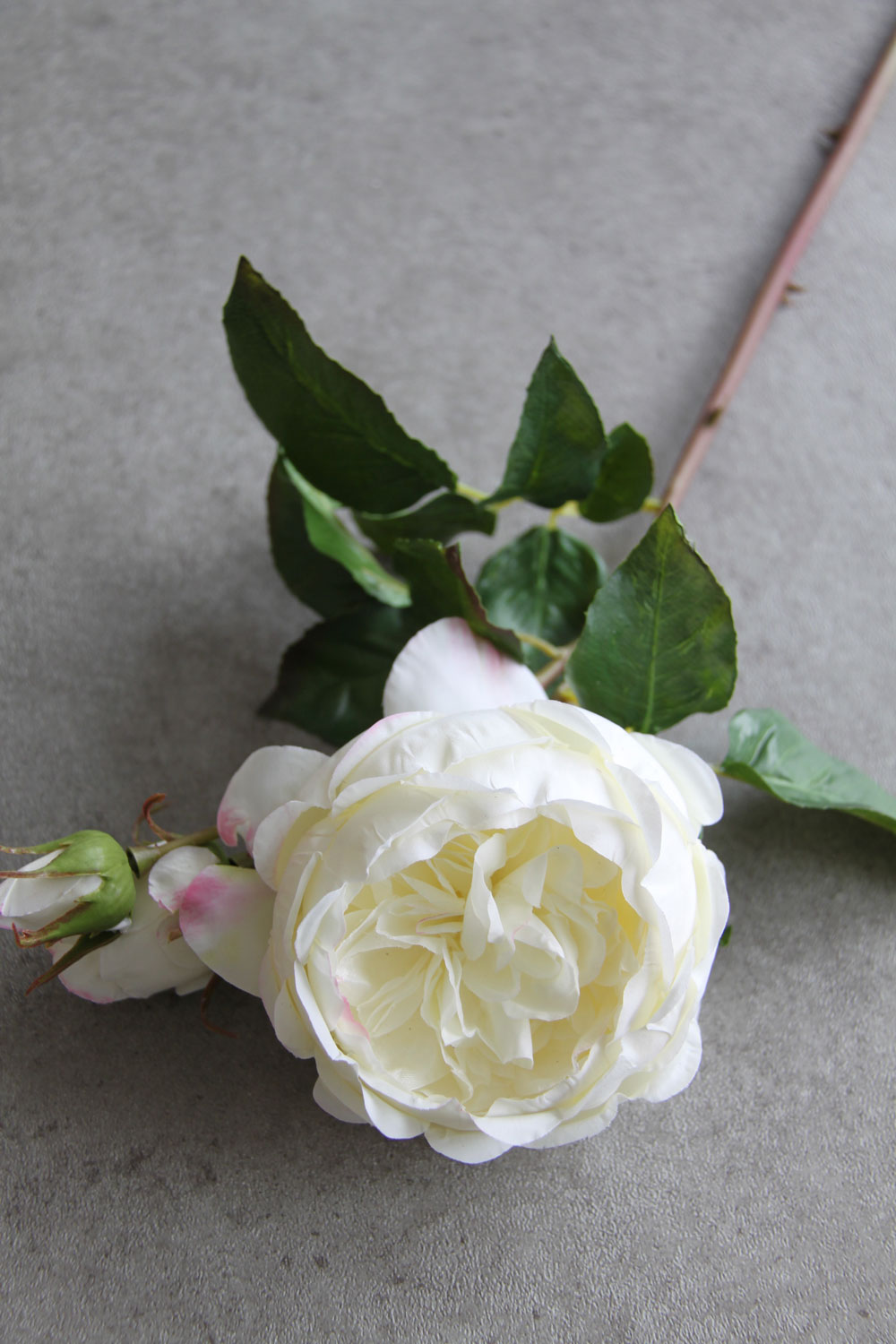 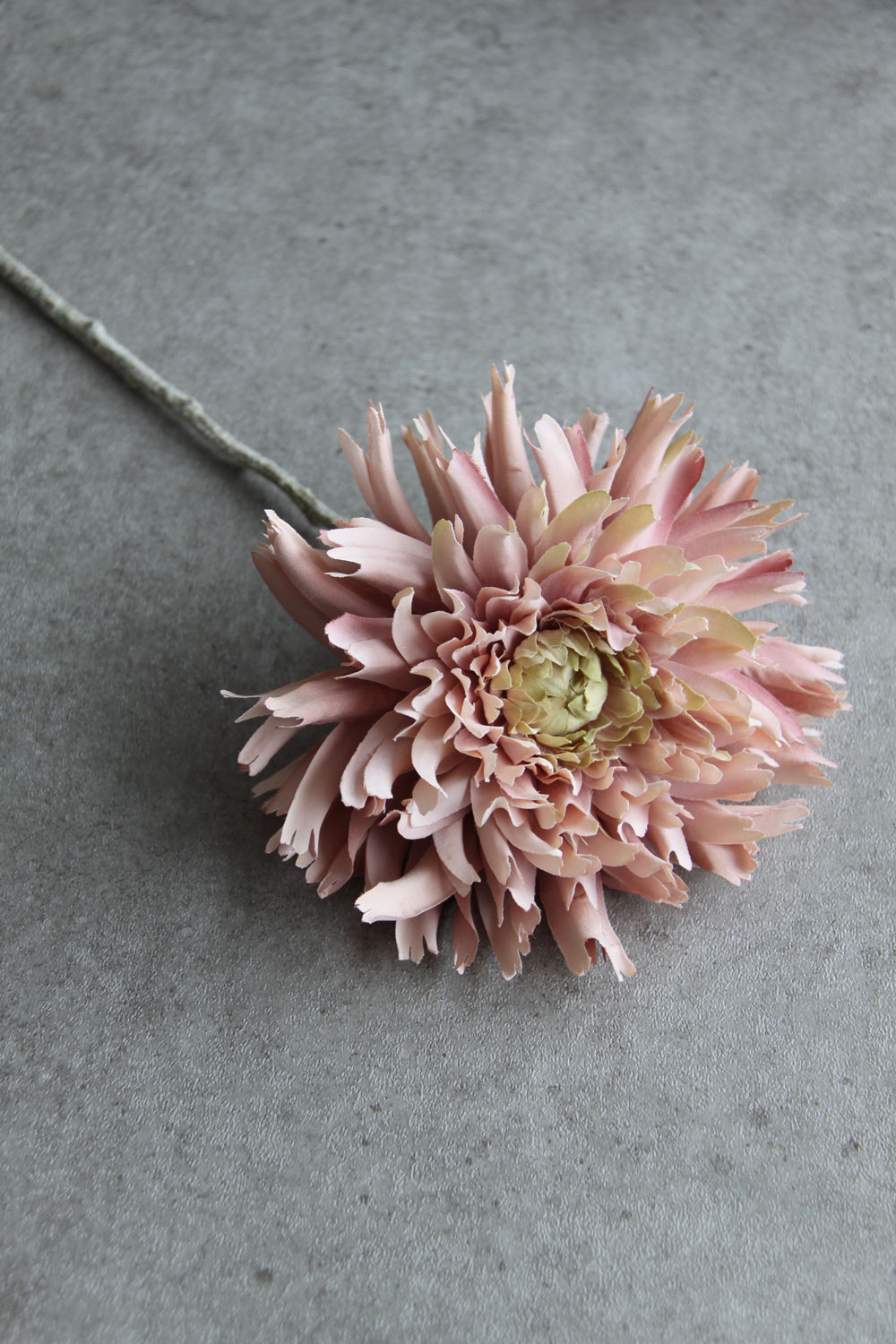 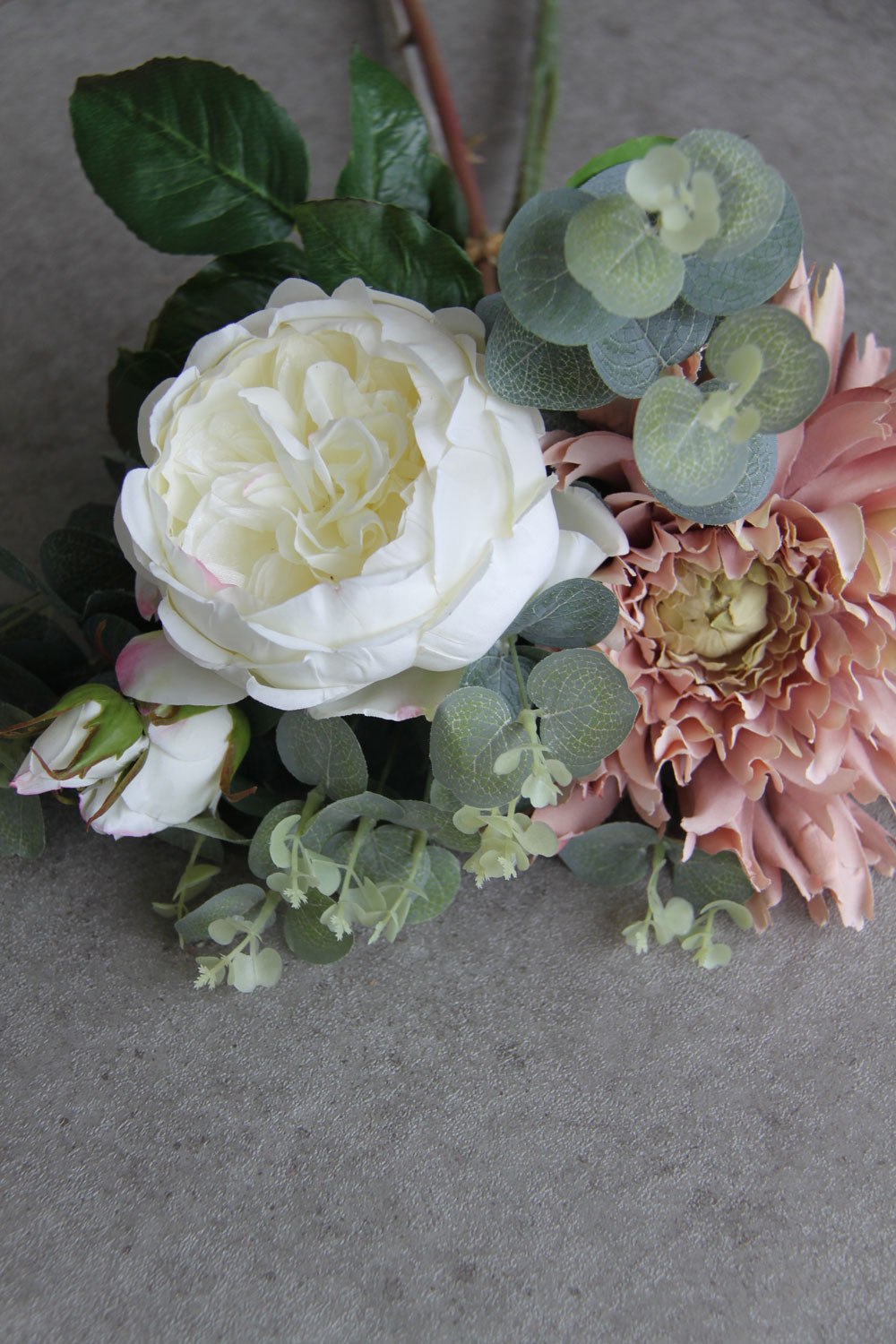 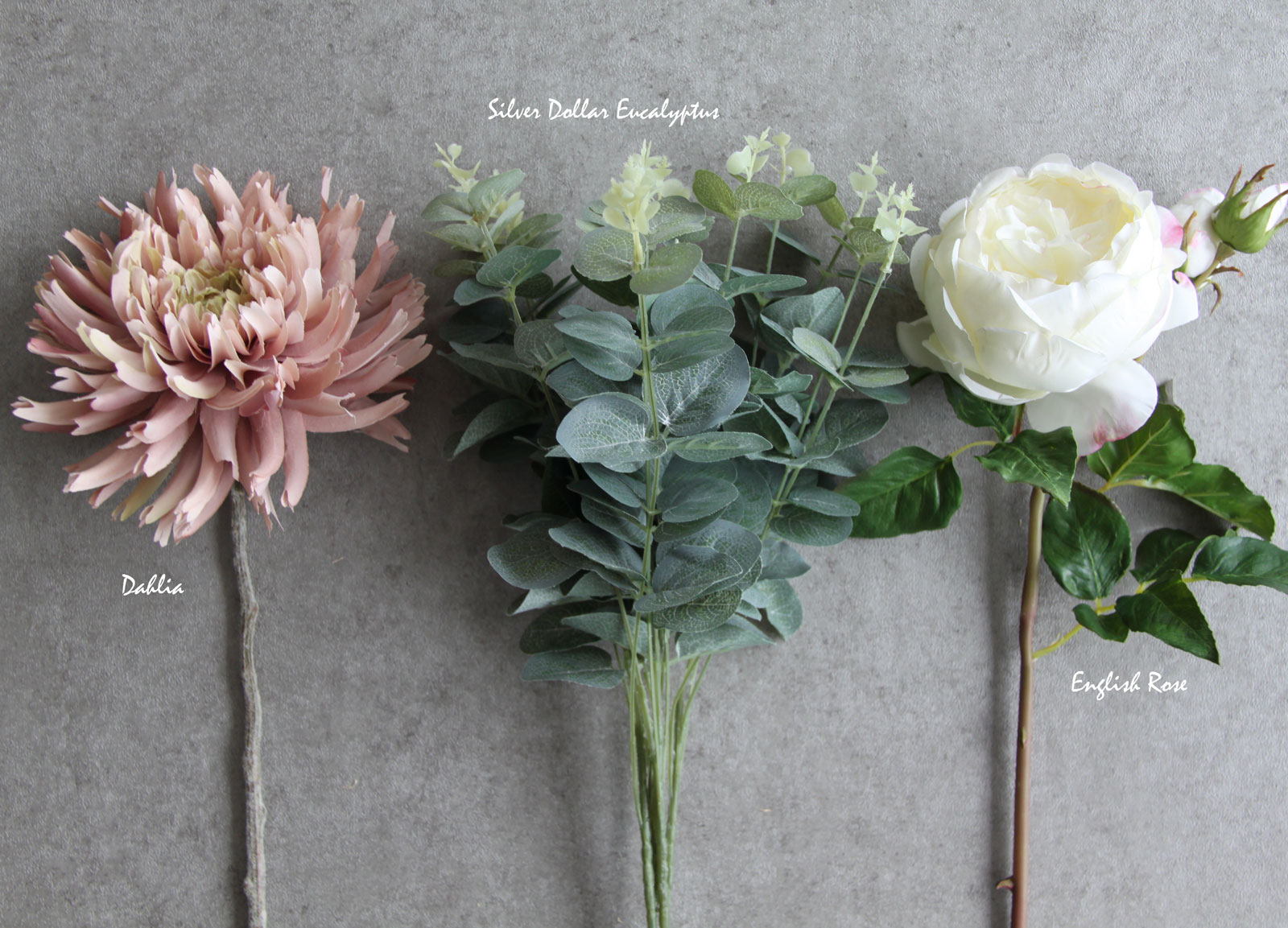 I love the look of layering seasonal flowers with lots of foliage. One way to do this would be to include eucalyptus.

Some good seasonal flowers to consider for Autumn include Scabious and Hydrangea. Scabious are available from May to November but is at its peak from June to October. It comes in pretty pastel shades so works nicely for an early Autumn wedding. They are quite delicate flowers though so need to be used carefully. Hydrangeas are widely available from Mid-Summer to Late-Autumn and come in a wide palette of colours. They pair well with beautiful roses and will last longer when the temperature starts to drop with the later months. You could also choose to include fresh or faux berries to add interest and a true seasonal feel.

Fill out your bouquet using Snowberries to add definition, furthermore it’s the perfect foliage for adding a seasonal feel to any arrangement. Or if you want to create a true ode to Autumn, then dead head flowers can look chic and beautiful when used correctly. 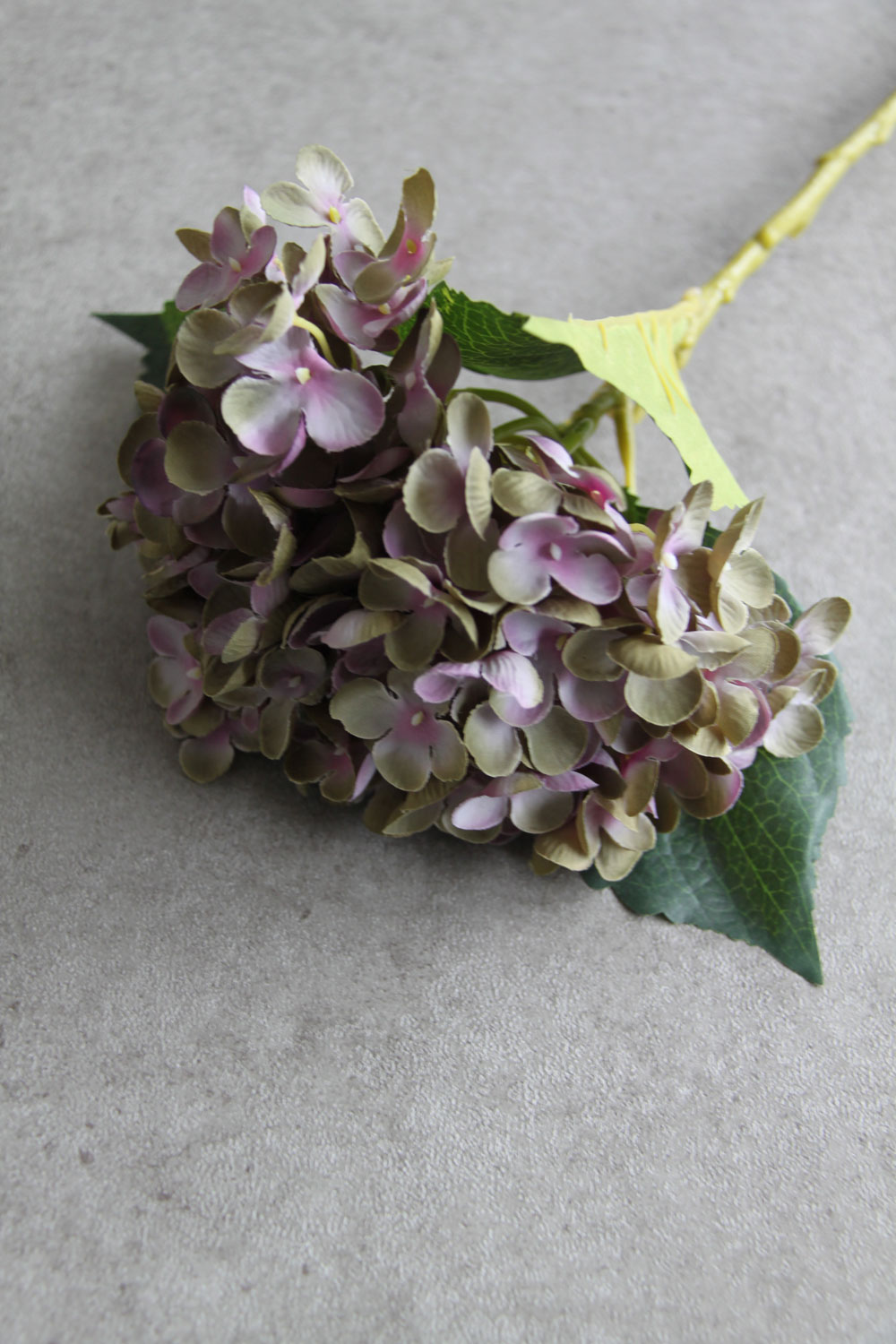 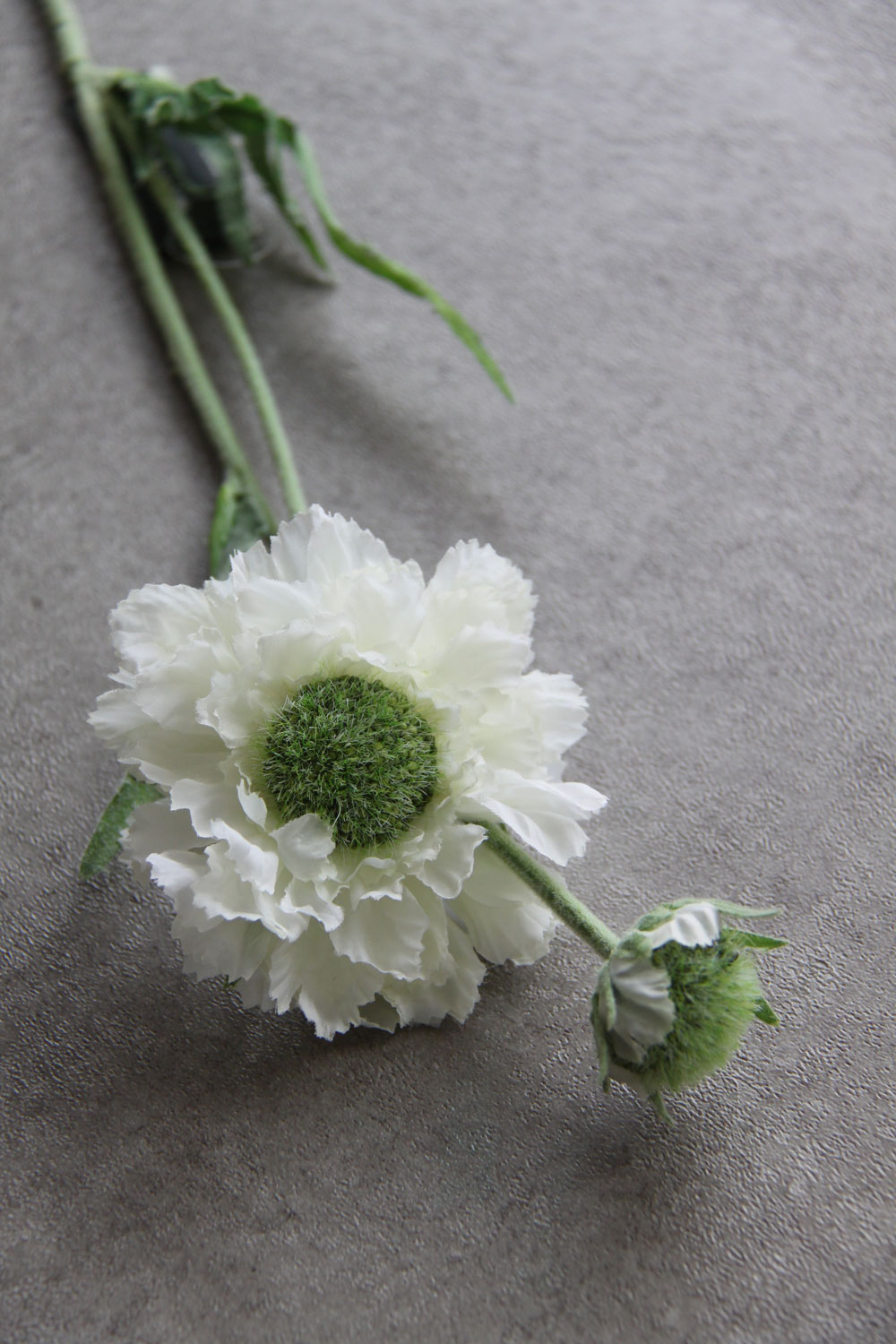 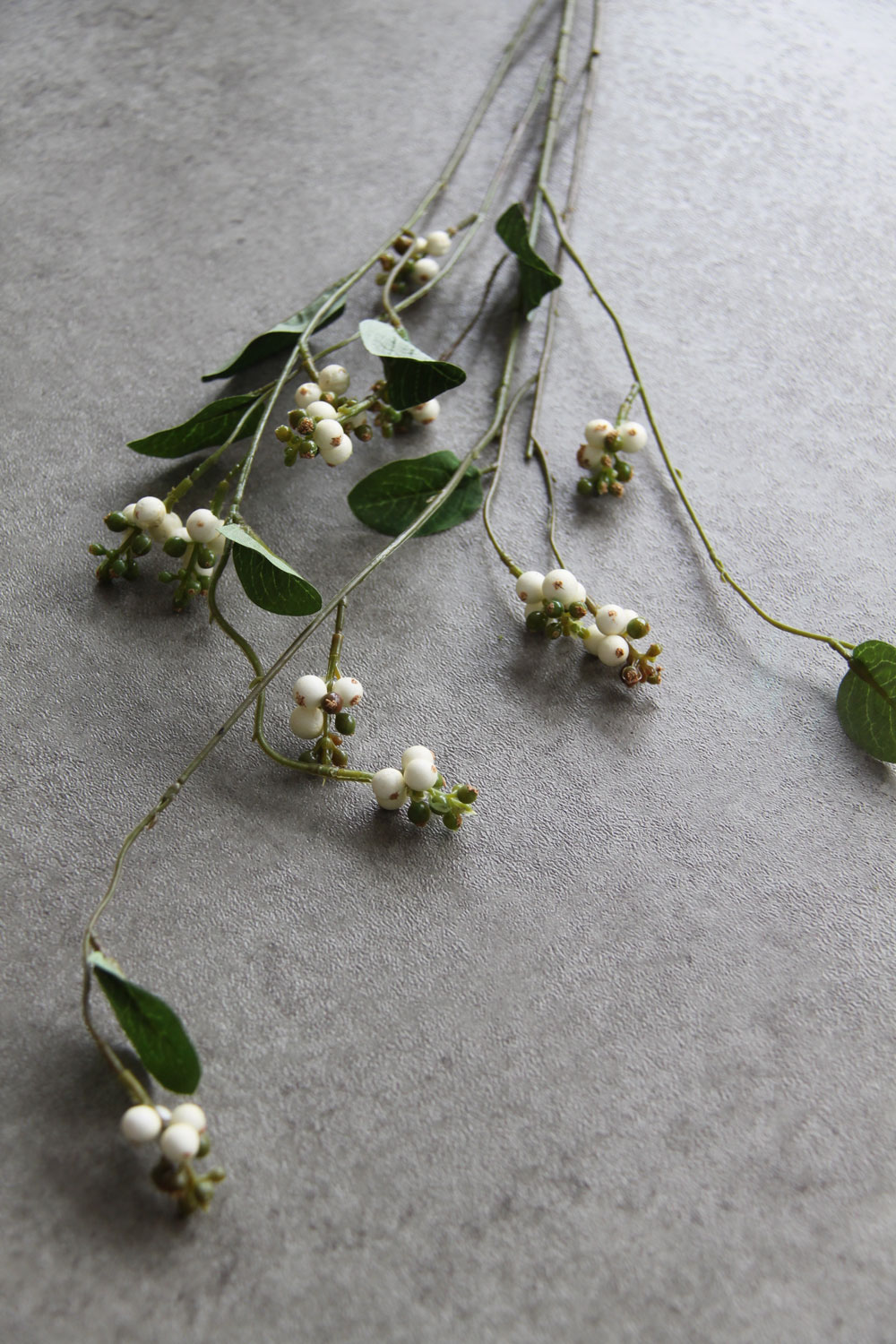 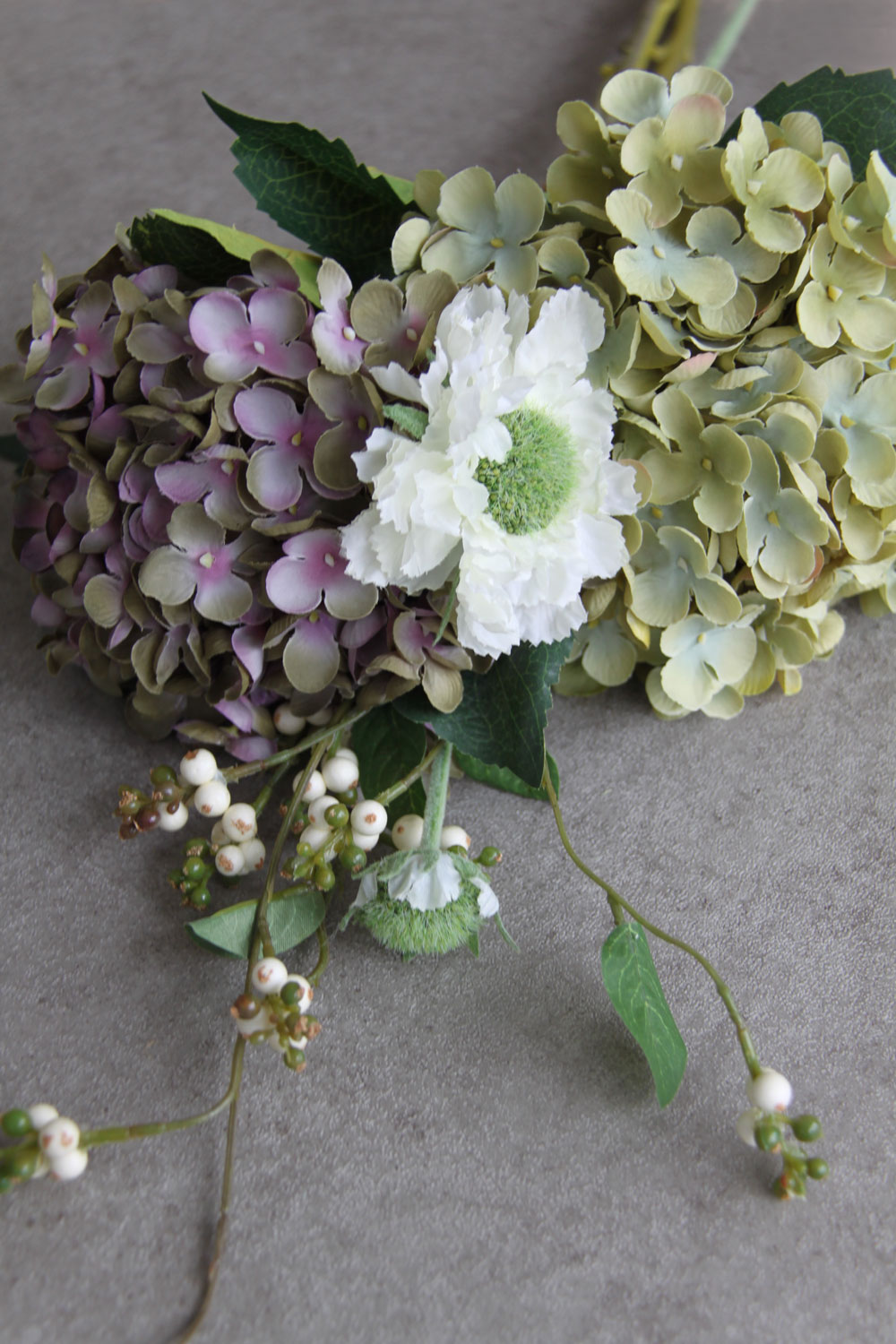 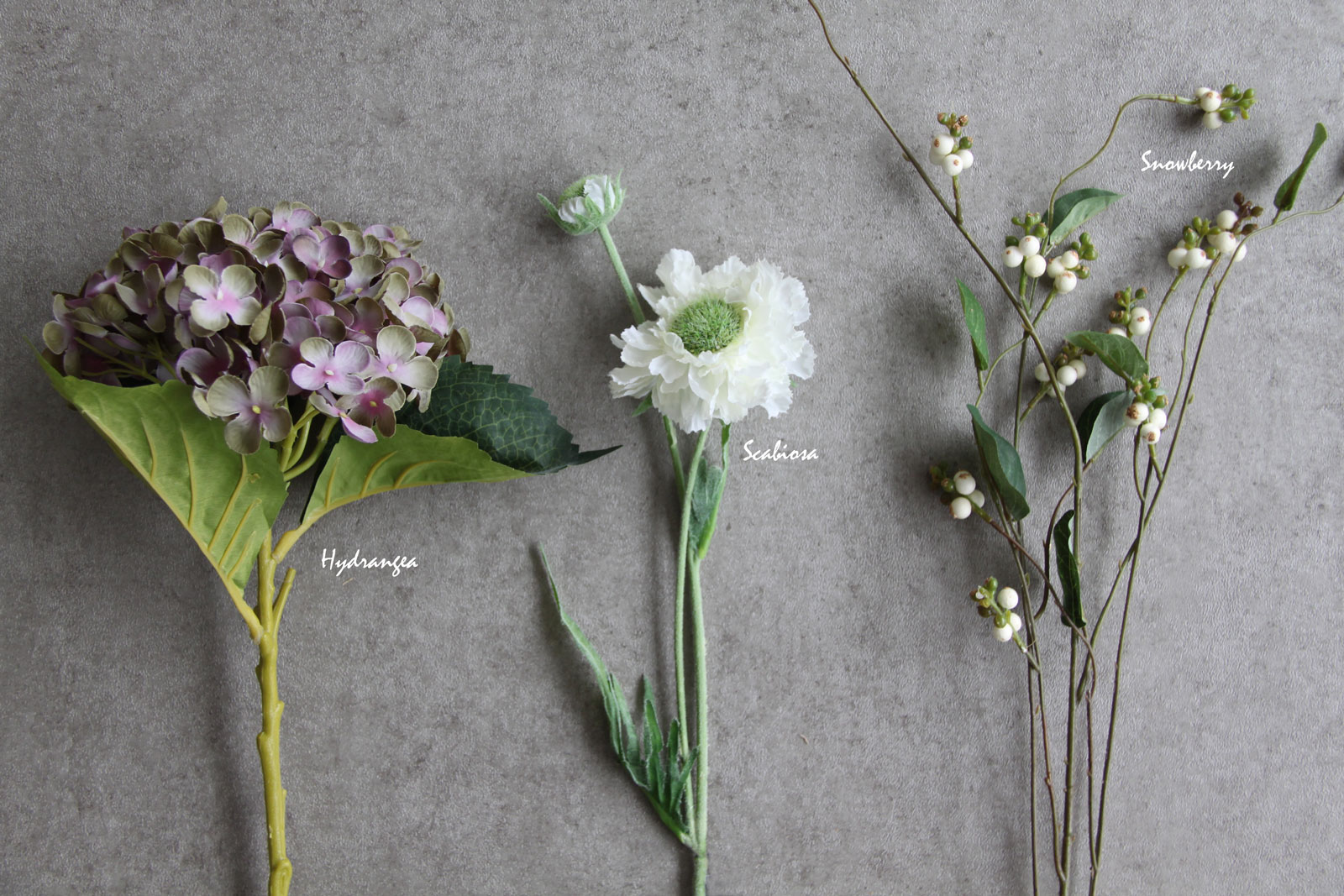 If you want to achieve the beautiful seasonal look of each month, I would recommend using the seasonal flowers that bloom at that time of year

When it comes to seasonal flowers, Viburnum is a Winter classic. Also known as Snowball, this bloom has a beautiful globe-shaped spray of flowers, that pairs well with foliage to create the perfect holiday themed floral arrangements.  You could add hypericum berries, mistletoe or holly for a stunning seasonal display, or silvery Dusty Miller leaves and sage green Lamb’s Ear that give a frosty effect that reflects the snowy season.

For late Winter, lending its way to Spring, a good flower to consider would be Ranunculus which is in season from February. These dainty flowers have layered, paper-thin petals that give a feminine and whimsical look to the arrangement. The also look lovely with lots of other flowers or greenery because they are smaller blooms. Soft greens like ferns look particularly nice and make a lovely Winter to Spring concept. 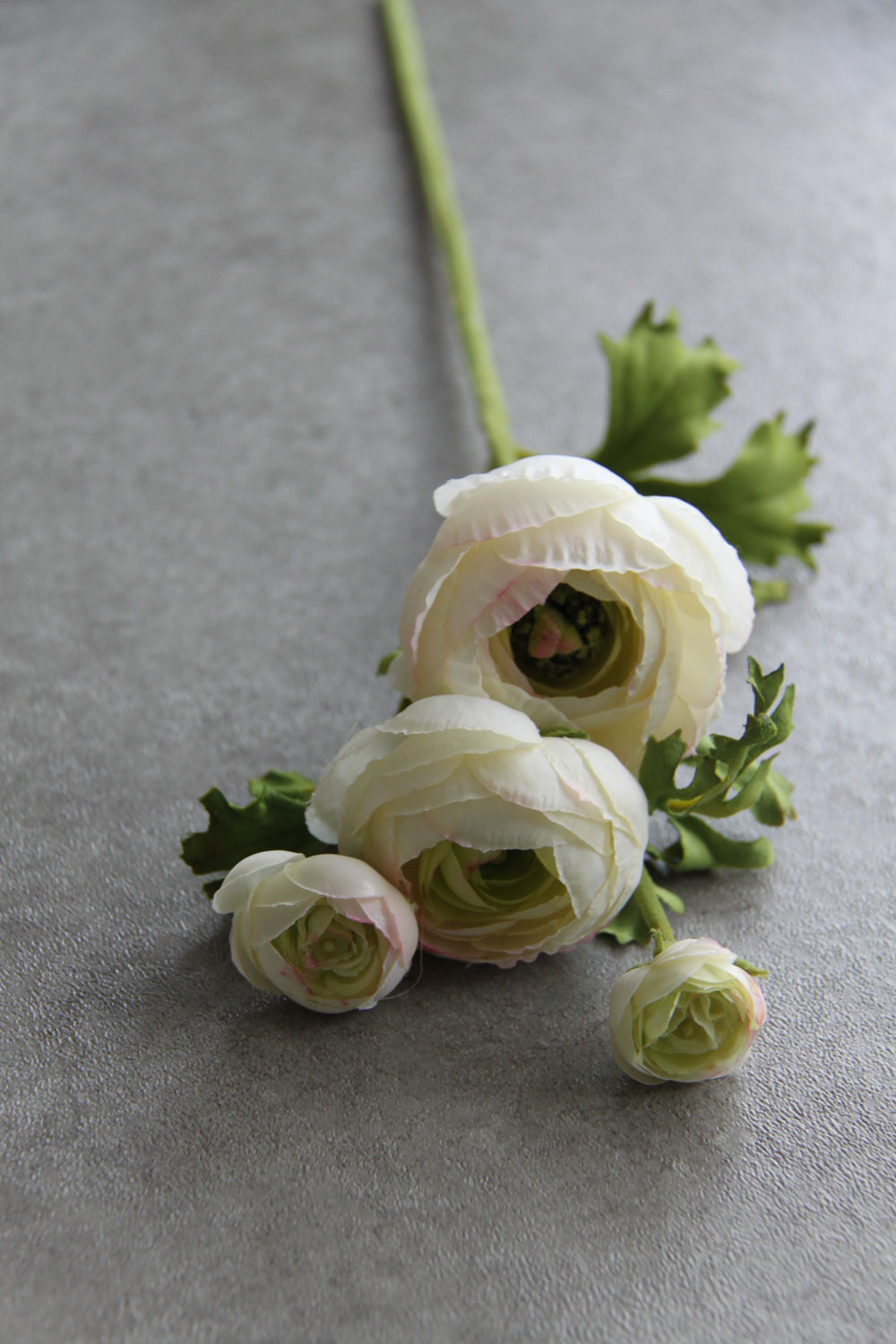 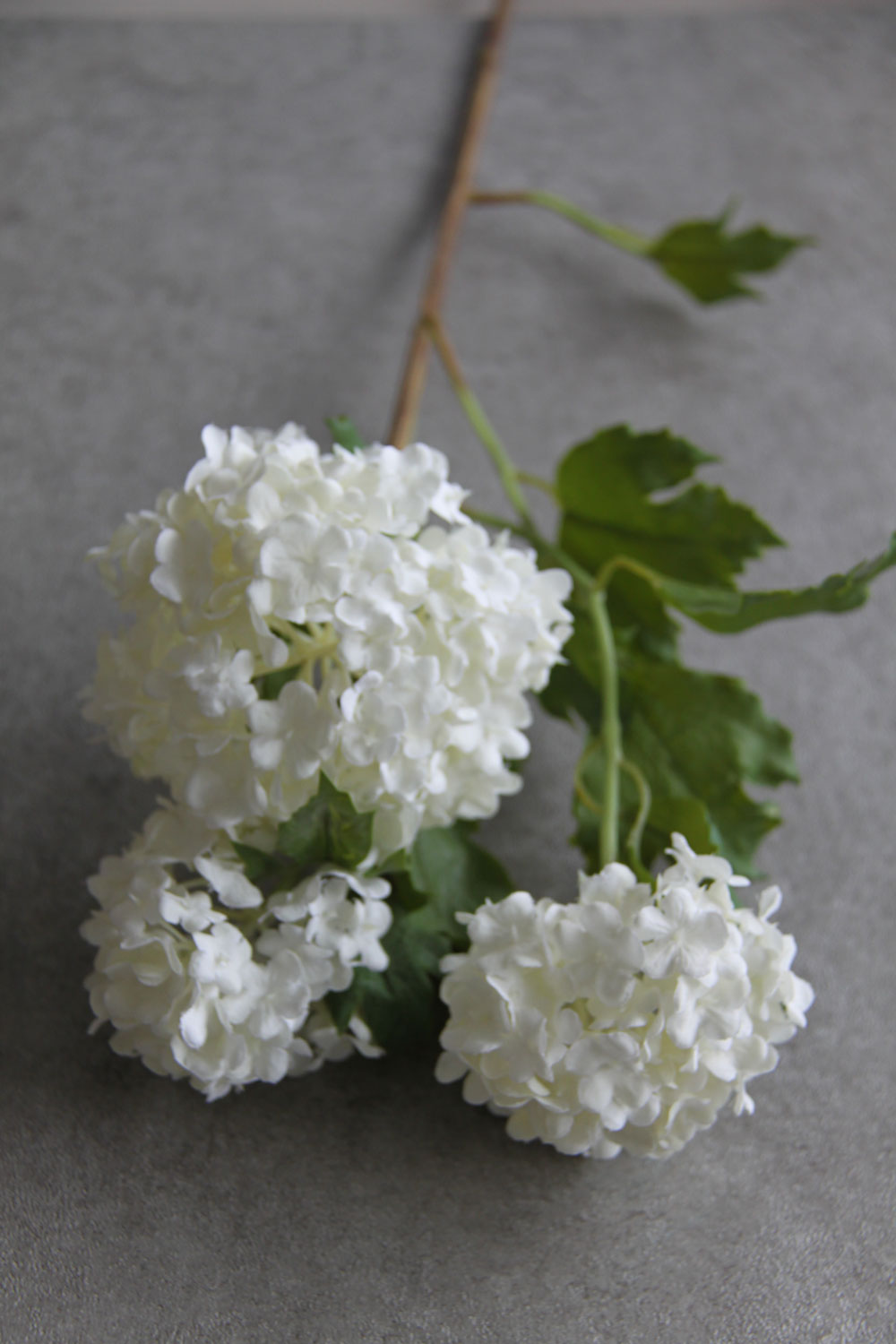 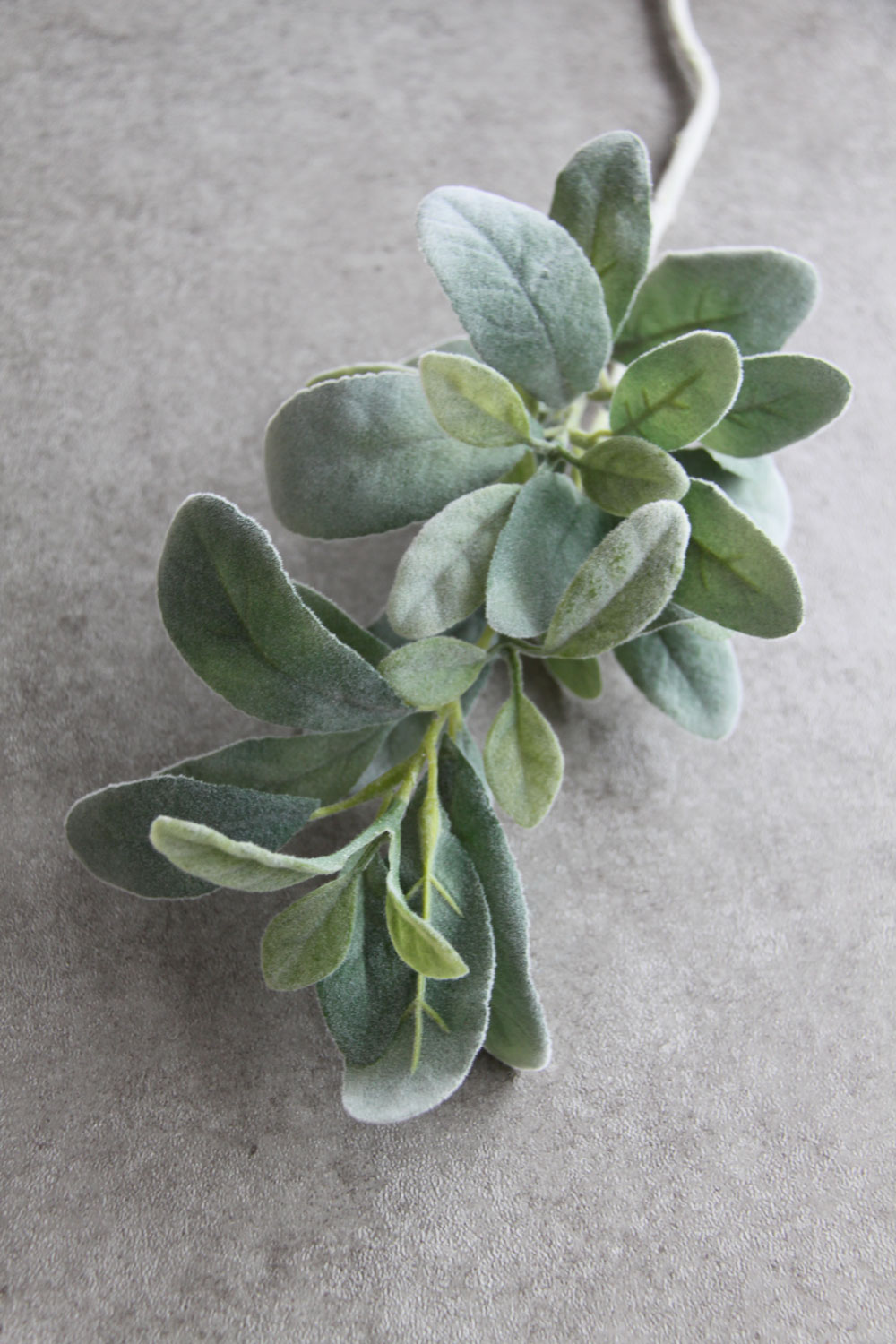 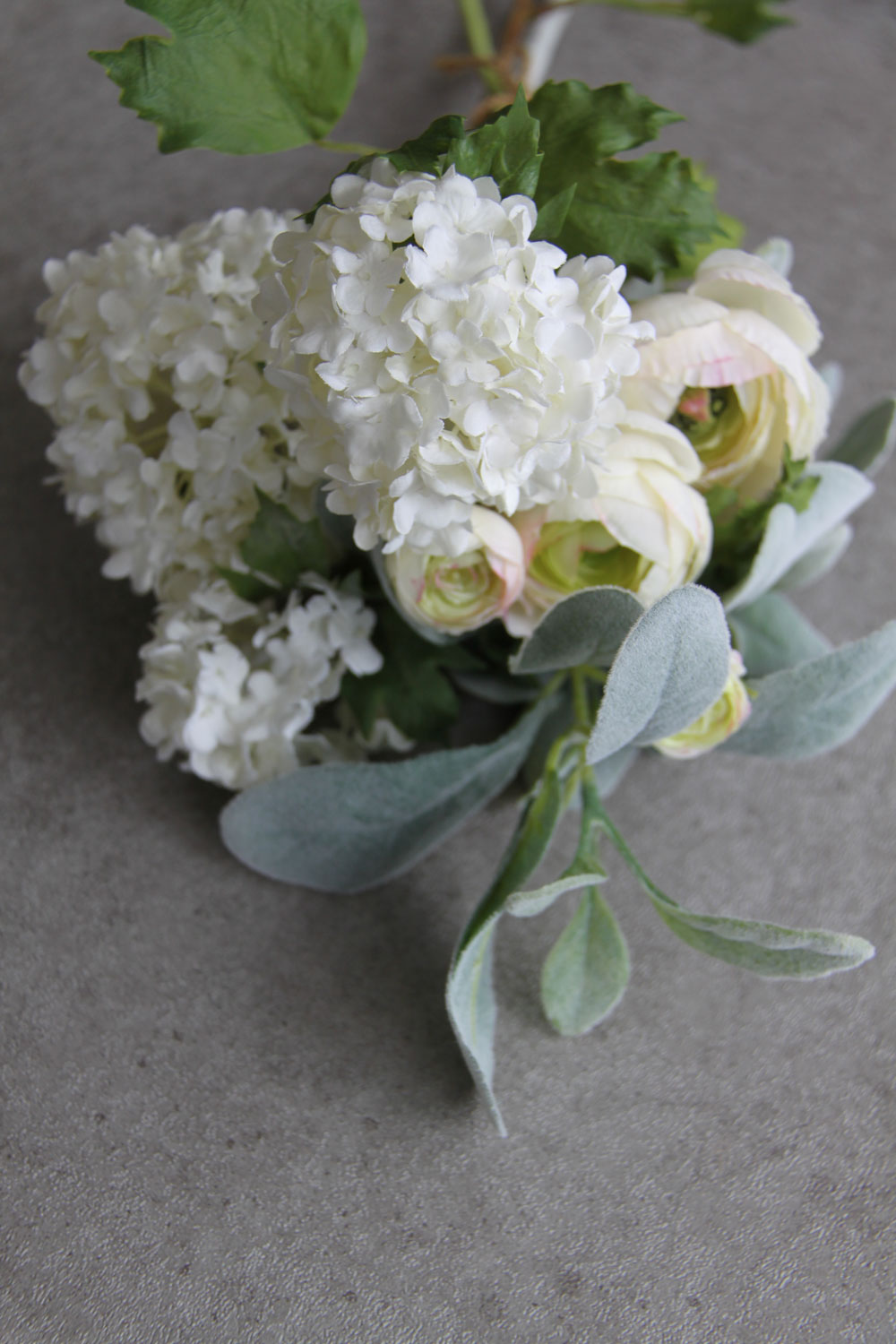 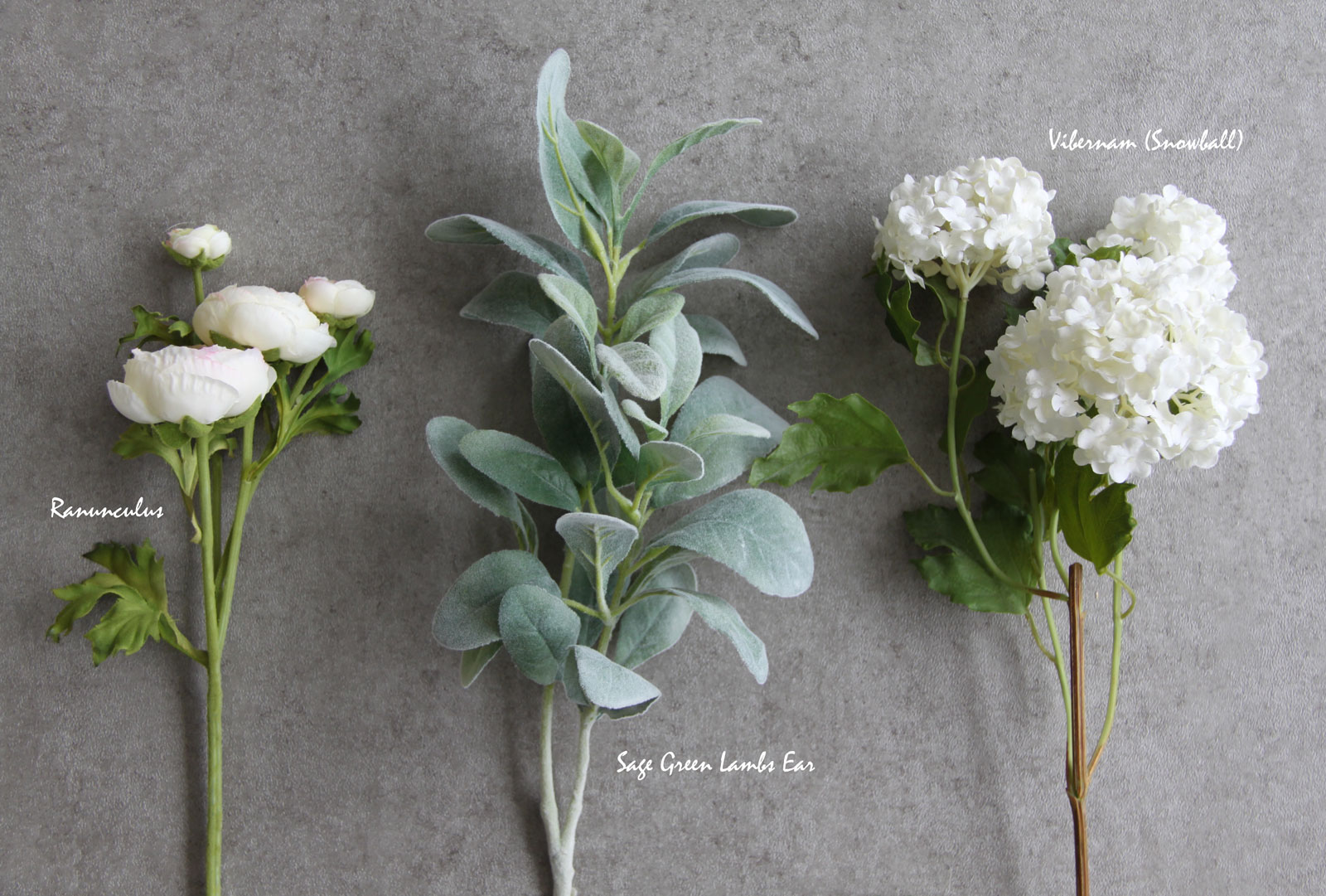